Today I will be reviewing two liquid eyeliners which I think are good dupes. The American eyeliner is the Tattoo Liner from Kat Von D and the Korean eyeliner is Waterproof Pen Liner from Macqueen New York.

Macqueen New York products are made in Korea so I don’t know what “New York” represents in their name. There isn’t a whole lot of information or background on the company online.

Kat Von D is an American tattoo artist who created her own makeup line. Her products are exclusively sold at Sephora.

Ease of application and longevity is what I generally look for in liners. Since I have hooded eyes, eyeliners and mascaras tend to smudge on me. I think I have found my HG liner! Keep reading to find out which one it is.

Both liners claim to be waterproof and budge proof, lasting all day.

Achieve eye perfection with this high-pigment, waterproof liner that stays put all day for a fade-, melt-, crack-, and run-resistant finish. The superfine and flexible brush tip glides across the lashline for incredibly fluid application, allowing you to create a variety of looks with ease. Unlike traditional felt tip liners, this brush tip will not fray.

Keeps a long-lasting vivid line without smearing for a whole day.
Create a line from beginning to end along the lash line. Fine-tipped eyeliner makes it easy to contour and control eye definition. The waterproof liquid formula creates thin, smooth strokes that can be layered for more emphasis.

Both liners have the same brush tip which is awesome for precision lining around the lid. Great for creating wings.

They look exactly the same here. 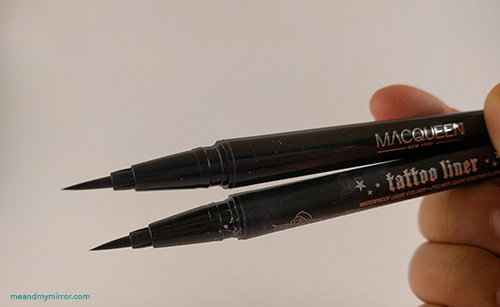 Both are black and the colour and pigmentation looks exactly the same. The left is Macqueen and on the right is Kat Von D. Please excuse the wobbly Macqueen swatch.

Application on the lids is exactly the same. You need to shake them both a couple of times before applying.

Really easy to draw a line with no bleeding and opaque in just one go.
I don’t line my waterline so I can’t tell you how easy or difficult it would be.

Both are waterproof and smudge proof.

Both have matte finishes.

With all the similarities you might be wondering what differs between the two. And its the staying power.

The Macqueen liner lasts all day on me. By the end of the day I can still see it on my eyes.

However, the Tattoo liner does not last all day. It fades throughout and by the end of the day, it’s completely gone!

I had swatched both liners on my hand for one of the photos. Its only been a couple of hours and I can already see the Tattoo liner fading slightly. I have slightly oily lids so the fading is more apparent when I have it on my eyes.

Since they are similar in many ways I would consider them to be good dupes for one another. But like all dupes, not everything is exactly the same.

I love the Macqueen liner. Its so budget friendly and fulfils all the requirements I have from a liquid liner. It’s opaque, easy to use and budge proof. Though it still is easily removed using my oil cleanser.

I tried out the Tattoo liner maybe a year before I dabbled in k-beauty so that was my first love. I even repurchased it once more (a full size) since I had liked the travel size one so much. The issue with it fading on my lids is minor in my opinion as you can easily touch up but I prefer not to. It’s also more than 4x the price of the Macqueen.

What’s your favourite budge proof liquid liner? Have you tried these out yet?

Welcome to my blog!

Hi there, my name is Kim and I’ve become a bit obsessed with beauty, particularly skincare, in the last few years. The content of my blog varies from drug store to luxury as well as asian to western so you will find a bit of everything here.

I hope you enjoy my posts and find them helpful.